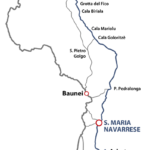 Santa Maria Navarrese is located on the central-eastern coast of Sardinia.
It is just 10 km from Arbatax and Tortolì marina and airport which are connected to Genoa, Civitavecchia and the major Italian cities.
It is 150 km from Cagliari – Elmas airport, which is connected to the rest of Italy and the major European capitals, and 150 km from the port of Cagliari with important lines connecting cities such as Genoa, Civitacecchia, Naples and Palermo.
It is 160 km from the port and airport of Olbia, another major centre connecting the peninsula with lines and low cost flights to European capitals.
On the northwestern coast there is the Porto Torres marina and Alghero airport, also well connected to the major European cities.